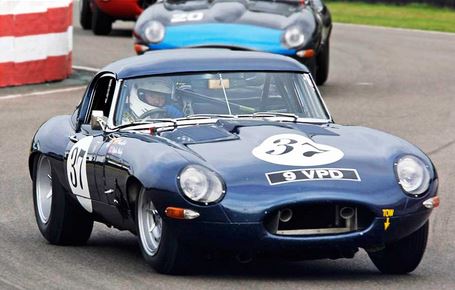 Where could you possibly hope to watch over 1,000 classic cars compete against each other in more than 20 races and demonstrations? At the Silverstone Classic 2018 from Friday 20th July for 3 action packed classic car racing days.

It all kicks off at 9am on Friday with Historic Formula Junior (1958-1960) Qualifying Round followed at 9:32am by the Stirling Moss Trophy For Pre ’61 Sports Cars- Qualifying Round. Friday is mostly set aside for qualifying rounds leading to Saturday and Sunday’s racing. However – Silverstone have added some great demonstrations to Friday’s itinerary including the Legends of Modern Formula One at 1:25pm.

The first race for this years Silversone Classic is the Jim Clark Trophy For Historic Formula Junior (1958-1960) on Saturday morning at 9:03am followed by Race 2 – Royal Automobile Club Tourist Trophy For Historic Cars (Pre ’63 GT)at 9:40. Eleven races in all on Saturday and a further Ten classic car races on the Sunday. Watch the very best classics from the mid 40’s to early 70’s with everything from single seater Formula 1 cars to Touring Cars and even two wheels with the World GP Bike Legends.

Tickets sell out very quickly for this hugely popular event. Visit the official site now to book your tickets to the Silverstone Classic

Keep your classic car on the road with – CarParts4Less.co.uk. One of the largest online car and van parts store in the UK. They have a complete selection of high quality car parts for a wide range of makes and models – offered at the lowest prices

Win a Supercar? Every week someone is guaranteed to win a BOTB Dream Car. In the past 19 years there have been over 400 winners, taking home over £23 million worth of prizes. Use your Spot the Ball skill for a chance to win The Best of the Best