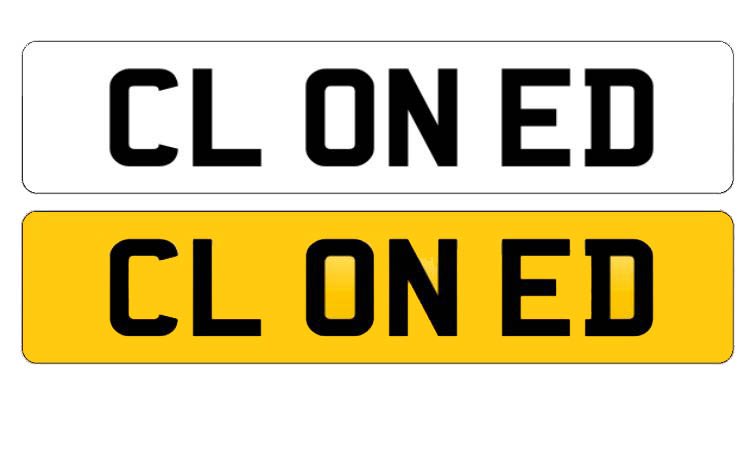 A car owner receives a letter informing them that their car has been captured on CCTV driving over the Dartford bridge 5 times. The authority in charge is demanding the payment of a £100 fine. However, the driver hasn’t been anywhere near that area for 18 months. Something has gone wrong. The car owner needs to act quickly. Has the innocent car owner’s number plate been cloned? Is it in use on a similar vehicle?

For the example above – assuming the vehicle has genuinely not been near the Dartford tunnel the options are either:

What to do if you’ve been Cloned

If you have been incorrectly identified as the driver committing a driving offence you will need to prove your innocence. Convince the authorities that your vehicle was NOT in the area concerned at the time of the offence. Maybe you were parked in a local car park with CCTV. Maybe you were using your vehicle for work in your area – miles from where the offence was committed. Collect as much evidence as you can to support your claim of innocence. Make the suggestion that your number plates must have been cloned.

If you believe your number plate has been cloned contact your local police authority and the DVLA.

As many as 1 in 3 cars have a hidden past. When buying a car for many thousands of £’s surely it’s just a matter of common sense to pay for a car data check to ensure the vehicle you are buying has nothing to hide. Popular car data checks will check to see if your car has ever been stolen, whether it has valid vehicle tax. It’s also now free to obtain a full MOT history and much more. Please consider using one of the services offered by our affiliated partners above (HPI check or MyCarCheck)

MyCarCheck.com vehicle history reports highlight if a car has been stolen, exported, written-off, scrapped & much more from just £1.99. Buying a car is a big deal so buy with confidence. MyCarCheck.com can reveal a vehicle’s full history, enabling you to make a more informed decision. Discover a vehicle’s hidden history, if it’s been written off or stolen, has outstanding finance and much more. They also have some grat deals for multi-car bundled reports

HPI Check – popular vehicle checking service from under £10. Premium service comes with £30,000 data guarantee for peace of mind. HPI are the market leaders in vehicle history checks. They are all about giving used car buyers the right information at the right time when buying a used car, van or bike. By following HPI’s advice, doing an HPI Check, and buying prudently, the car buying experience should be as pain-free as possible.

How do criminals get the plates made

When purchasing registration plates from a respectable source the company will ask for evidence the customer is the legal owner of the vehicle. A registered number plate supplier will ask to see evidence of the following

Criminals take advantage of unscrupulous individuals who bypass the system and manufacture the registration plates WITHOUT undertaking any of the checks detailed above. A recent (Sept 2018) BBC programme – Inside Out – tracked several such businesses and highlighted just how easy it is to get hold of illegall cloned number plates. For more details please see the BBC report on cloning number plates (external link)

MOT – check your MOT status FREE
MOT – get an up to date MOT history for any vehicle
Vehicle Tax – check the status of your car’s road tax
Report an untaxed vehicle
The new MOT rules (May 2018)
Number plate cloning is on the increase – what to do if your car registration is cloned
Pre-MOT checks. A few things to check yourself before booking your car’s MOT
What are the most popular causes of MOT failure?
Is my car STOLEN
Is my car WRITTEN OFF – Category C (now S) or Category D (now N)

The IsMyCar Blog is packed with articles on the latest automotive news, events and general interest. Read about the growing crime of registration number cloning – what to do and how to avoid it. Up to date information on the recent changes to the MOT test, ways to avoid the 4 most common MOT failures and much more. Did you know that NIL-RATED vehicles still need to be registered for vehicle tax? Avoid a minimum £80 fine by ensuring you register your car for vehicle tax even if it’s nil-rated or tax emept.